Conference Series Ltd invites all the participants across the globe to attend 12th International Conference and Expo on Proteomics and Molecular Medicine Dublin, Ireland.

Keynote: The international debate on the regulation of the new gene editing methods

The times of the old regulation on transgenic plants is over, we need new strategies to ensure the safety of the coming Gene Edited crops. Still, some few things we should be aware of:

a) The process of trans genesis and of natural mutation are identical, the whole war on basic differences in the making of transgenic crops was built on wrong science, this was known since decades, but the fascination of the new breeding possibilities with transgenic crops was so huge that people lost in their general view of GMOs and followed a scientifically flawed Genomic Misconception.

b) It is since more than two decades clear that regulators based their complex laws on false premises of definitions of transgenic crops, The EU legislation on “GMOs” is based in important parts between scientific nonsense and protectionism: An unfortunate and ongoing Schumpeterian chain of public choices.

c) Since decades there has not even a headache been reported as a negative health impact of transgenic plants, unless it was based on questionable statistics and selective data.

The regulation of new Gene Editing is much easier, since the most precise methods do not even contain foreign DNA, the alterations in the new crops are reduced to a few, precisely defined sequences of another crop species or crop variety, which will be advantageous for the new breed. These “oligo-mutated” crops need a minimum of regulation (and according the US regulatory agency APHIS it should be not taken as GM plant to be regulated at all, but the US Environmental Office has not decided yet on the regulatory status. The European Regulatory units have not decided yet about the regulatory status, they are still in a tedious and long enduring process of scientific debates. The opposition of GM crop breeding is maintaining the resistance against Gene Editing, and wants not only to exclude it from their own ideas on crop breeding, but also include it together with the transgenic crops in a strict and costly regulatory process with strict political and weak scientific arguments.

The authors opinion can be summarized according to the ideas of Wolt and Podevin, they base their view on a dynamically flexible regulatory system, with a lowest category of short term regulation during a few years for the oligo-mutation breeds, ending on the highest level of regulation with the old transgenic crops.

Keynote: T-patterns and self-similarity from the RNA world to human mass-societies

Magnus S. Magnusson has completed PhD in 1983 from the University of Copenhagen. He is the author of T-pattern model and the corresponding detection algorithms in the THEMETM (PatternVision). He has focused on real-time organisation of behavior, co-directed DNA analysis, published numerous papers and given invited talks and keynotes at universities in Europe, USA and Japan and at international conferences in ethology, psychology, neuroscience, mathematical sciences, and science of religion, proteomics and mass spectrometry. He was Associate Professor and Deputy Director in the Museum of Mankind, National Museum of Natural History, Paris from 1983-1988. He was repeatedly invited Professor in psychology and ethology (the biology of behavior) at the University of Paris, V, VIII and XIII. Since 1991, he is the Founder and Director of the Human Behavior Laboratory (hbl.hi.is), University of Iceland. He works in collaboration between now 32 universities on Methodology for the Analysis of Social Interaction (MASI) initiated in 1995 at the Sorbonne, Paris based on “Magnusson’s analytical model”.

Discovering self-similarity of temporal and spatial patterning across different levels of organisation obviously requires a pattern type common to two or more of the levels. The hierarchical self-similar T-patterns recurring with significant translation symmetry were initially defined for the detection of complex, highly flexible and parallel recurrent real-time patterns in mostly nonverbal behavior and interactions in animals and humans. But this type of pattern then also turned out to be common at a lower level, that is, in interactions in networks of neurones within brains. Eventually, spatial T-patterns seem very common (even omnipresent) at the still lower level of DNA, RNA and proteins. On the other hand, pattern types typically used to describe DNA structure are usually too simple or rigid to describe and discover real-time human interaction patterns. The RNA world added the DNA external memory and control strings and protein mass-societies (cell cities) evolved followed by mass-societies of cells (bodies). Finally, mass-societies of bodies evolved, but only in insects and humans; in insects over millions of years, but in humans in a biological eye-blink. Crucial in the mass-societies of proteins and humans, but absent in all the others, are extra-individual long T-patterned strings (respectively, DNA and text) typically lasting far longer than individual citizens. These have allowed near total domination of DNA based life and of the development of human mass-societies with population sizes rivaling the most populous cities of proteins and the appearance in human mass-societies of mass religions and laws as well as modern science and technology; finally leading among other, to the discovery of proteins and their nano-scale mass-societies. It seems possible that the study of each of these kinds of mass-societies may provide new insights and ideas for the other.

Graham Ball pursued his PhD in Informatics (UN funded) and a Postdoc in modelling environmental interactions with ANNs at Nottingham Trent University (NTU) UK in 2000. His work focuses on analysis of proteomic and transcriptomic data; searching for proteins and genes associated with cancer. He is currently a Professor of Bioinformatics at Nottingham Trent University and CSO of CompanDX UK Ltd, UK respectively. He is also an Associate Director at the John Van Geest Cancer Research Centre (UK) and biostatistics lead on three clinical projects. He has been involved in the development and validation of machine learning algorithms based on artificial neural networks (ANNs) for the past 18 years. He has 145 journal papers and 5 patents in this area. His current research interests are directed at the use of machine learning techniques for the identification of biomarker panels, pathway motifs and molecular drivers characterizing biological systems. These include areas such as microbial pathogen host response, drivers and characteristics of hallmarks of cancer, drivers of Alzheimer’s disease and diagnostics of latent tuberculosis.

Cancer is a complex disease with a myriad of forms and prognoses occurring within each type. For example, in breast cancer using genomic profiling in excess of 80 sub types have been identified. The ability to characterize the disease for each patient may offer the potential to assess the molecular sub-type of the disease and thus accurately determine the patients’ prognostic outcome. Methodologies such as mass spectrometry-based proteomics, RNA-Seq and gene expression arrays offer the potential for characterization of disease derived samples using a huge number of proteins or genes. This depth of information while providing a comprehensive overview of a disease state also proves problematic in its complexity. One has to search through potentially hundreds of thousands of pieces of information for consistent features that address a clinical question in the population. The human mind is very good at finding patterns in a system but is not able to conduct the task repetitively for large numbers of parameters. Conversely computers are very good at searching for features in such a data space, but previously defined statistical methods are not able to cope with the high complexity. Here we present the application of artificial neural networks (ANNs, a form of artificial intelligence having the characteristics of both human pattern recognition and computer automated searching) to finding genomic solutions to questions in cancer. We also present the use of a range of statistical and artificial intelligence-based machine learning techniques to develop prognostic models for breast cancer. Results of use of ANN algorithms for biomarker discovery, pathway modelling and molecular driver (putative drug target) identification; a parallel analysis of multiple molecular databases for breast cancer identification of markers that drive proliferation and thus predict response to anthracycline through network inference techniques will be presented. 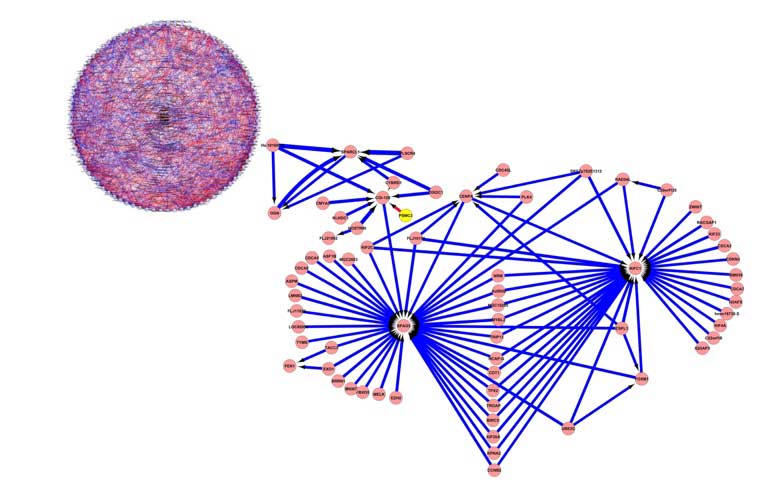